In the heart of Tuscia, 80 kilometers north of Rome, since the ancient Etruscan civilization, the culture of the baths was so widespread that it inspired and became a real cult for the entire subsequent Roman civilization.

In particular, the vestiges of the Roman baths wind for eleven kilometers along the ancient Via Cassia, on the outskirsts of Viterbo, taking on particular importance near the three main thermal areas: Aquae Passeris, Paliano and, the most important, Bullicame, witnesses of the importance of the area the writings of Strabone, Tibullo, Simmaco, Marziale and Scribonio Largo, doctor of the Emperor Tiberius.

The Middle Ages saw the Baths become the preferred destination of the Popes, first of all Gregorio IX, Bonifacio IX became another frequent visitor of the Baths of Viterbo to cure himself of the “severe pains of the bones” with water and mud.

It was later, in 1450, that Pope Niccolò V decided to build a real personal spa, which from that moment became the Terme dei Papi, equipped with all the comforts and embellished with architecture that only a Pope could afford, having built one splendid palace. That building with crenellated walls, beautiful cross-shaped windows and rooms covered with large vaults, has since been called the “Pope’s Bath”.

The beauty of the places and the curative effects were then cited and recognized by two of the most famous Italian artists: Dante Alighieri, who cited them in the Divina Commedia: “ Quale del Bulicame esce ruscello che parton poi tra lor le peccatrici tal per la rena giù sen giva quello …”and Michelangelo Buonarroti who drew sketches in pen.

At the Terme, a beautiful monumental pool of 2,000 square meters enriched with water jets, is fed by the waters of the spring, but the jewel is undoubtedly represented by the natural cave from which the thermal water comes out, forming limestone columns and emanating beneficial vapors. for the skin, respiratory tract and joints.

Marcello Ceccaroli, roman architect convinced that building hotels requires a strong specialization first of all on the part of the professional, to be also and above all the best consultant of the client starting from the feasibility plan of the hotel, to give precise answers to questions about the meaning: why a hotel, what its specific functions should be, in that place and for which service, aimed at which target customers and expression of which ownership and management, how the project idea is expressed and realized through forms, materials and functions.

Functionality, combined with logistics and aesthetics, are the fundamental parameters that must inspire the work of the hotel designer. 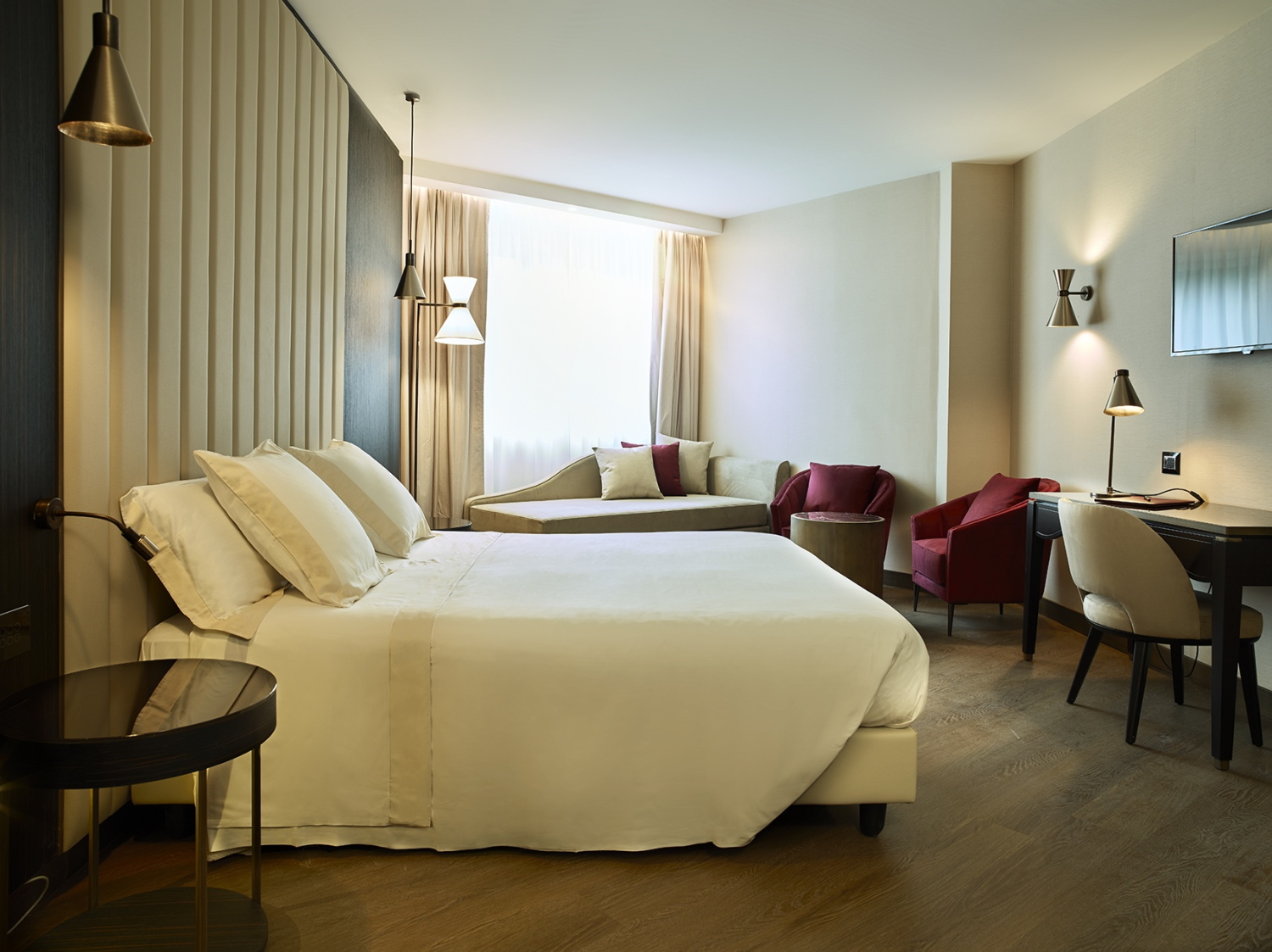 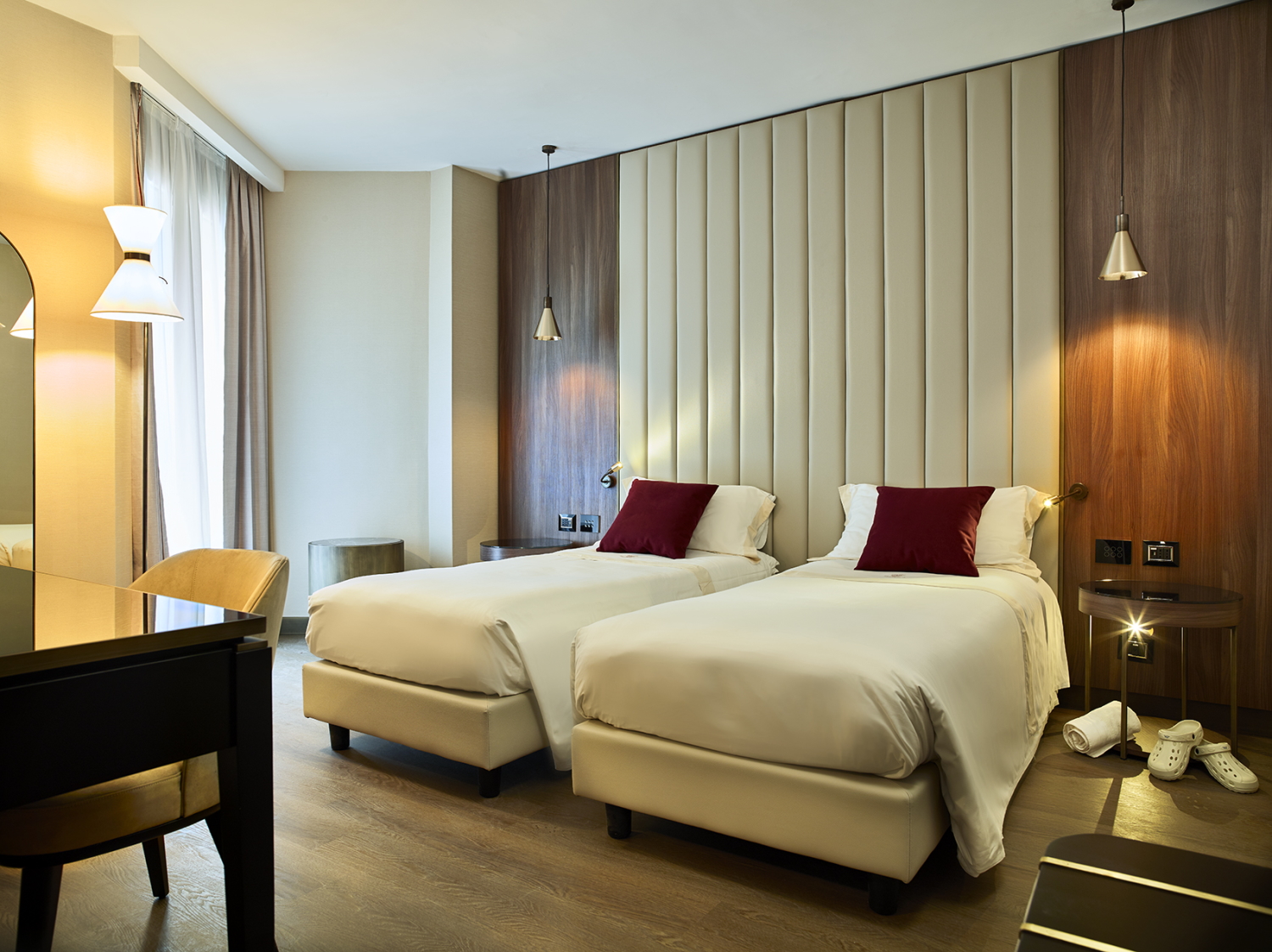 CUSTOM MADE LIGHTING BY LUMIS

In perfect logical line, the Architect Ceccaroli involved in the project LUMIS, as a manufacturer of lighting fixtures, entrusting the company with the realization of his design ideas, trusting in the experience of the company, specialized in the hotel sector, of 30 years of totally Italian production.

All rooms are furnished with a skilful mix of modern and traditional, starting with the choice of materials, which transforms the space into a precious welcome, with LUMIS appliances specially made to combine quality with long-lasting attention.

In the common areas, a 3-meter-diameter chandelier enriched with 100 brass pendants, plexiglass “gems” and LEDs to illuminate the volume, perfectly reproduces the concept of magnificence desired by Pope Niccolò V.

On the lounge bar, a bronzed brass structure with LED strips and 1000 cylindrical glass drops decorate the room, transporting the guest into a dimension suspended in time.

The Hotel Niccolò V, owned by the Sensi family, was enlarged by Arch. Ceccaroli to accommodate 38 rooms, prestige and luxury. 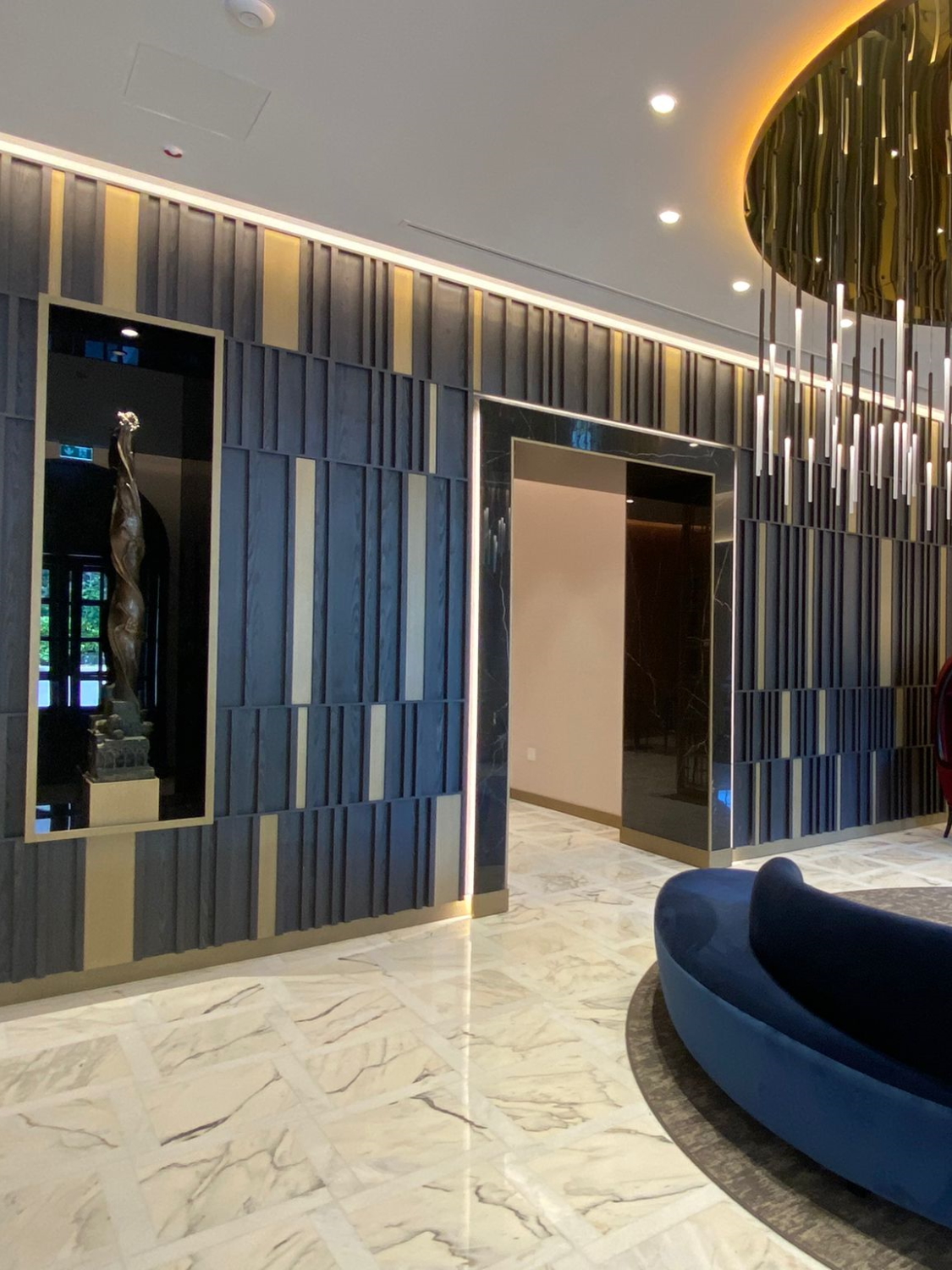 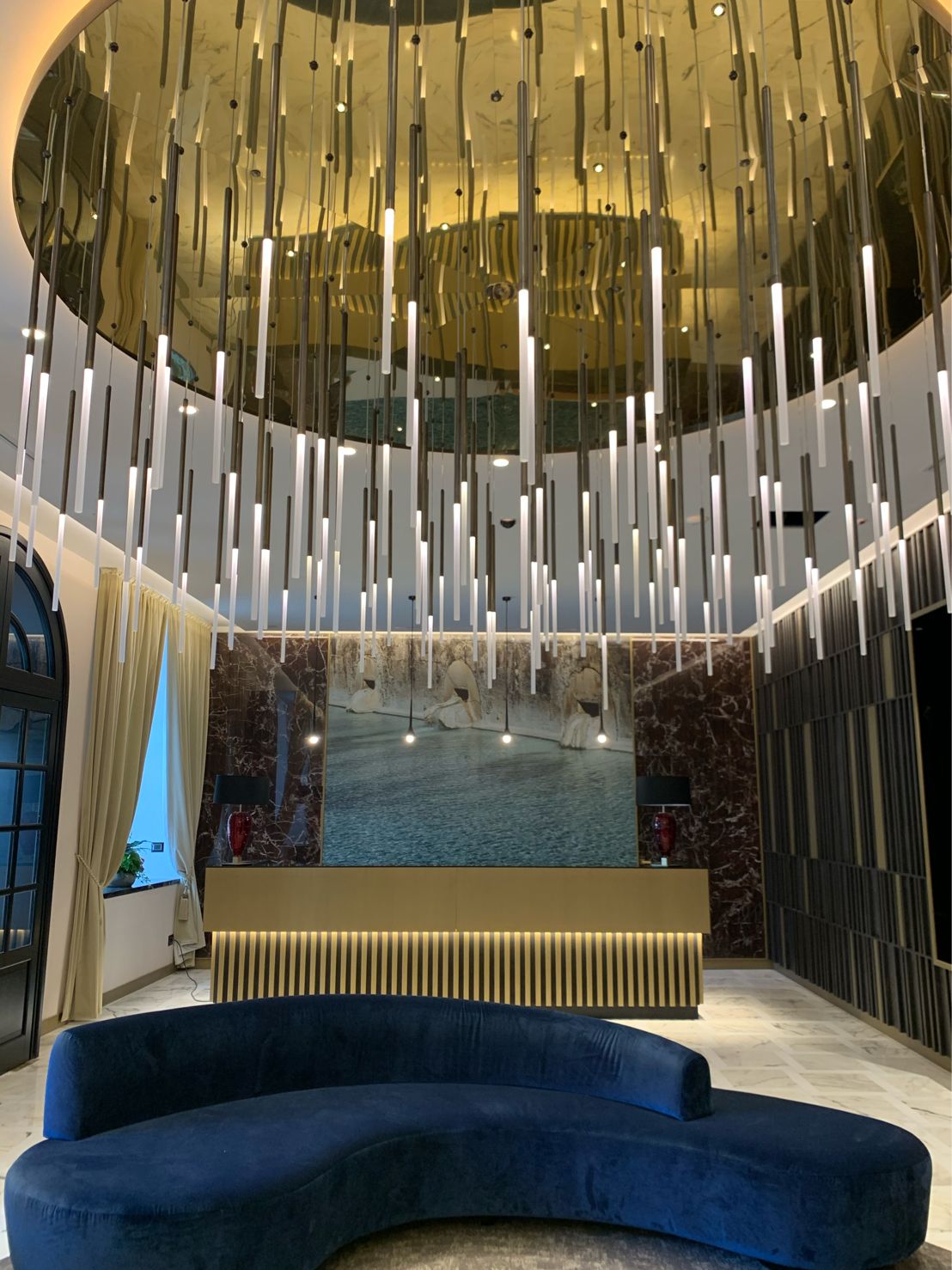 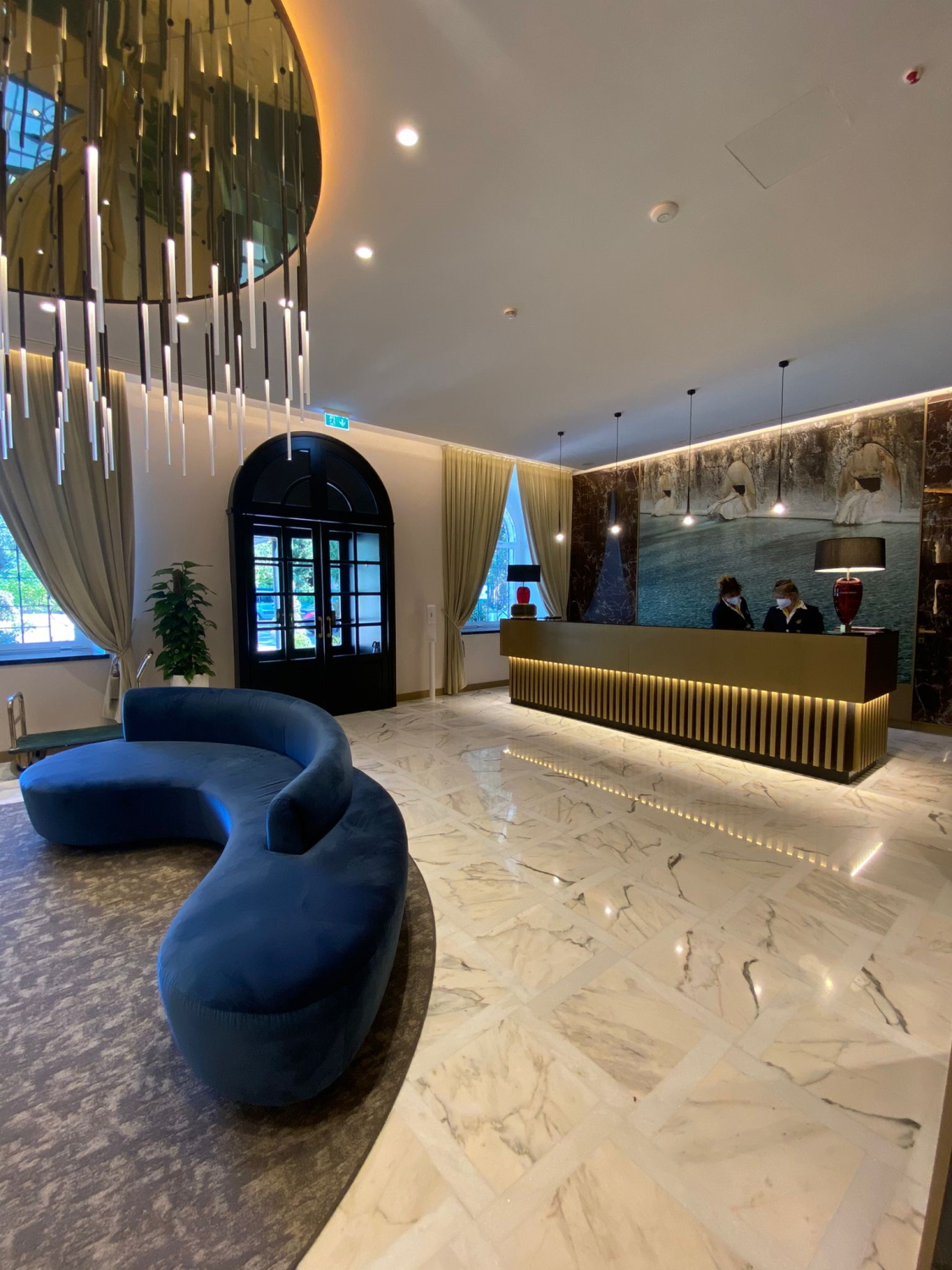